ESPN has seen steady growth over the past 50 years, with continued subscriber increases year-over-year, that is at least until recently. The entertainment sports network has seen a perplexing drop in subscribers over the past few years, and shows no signs of slowing this decline. 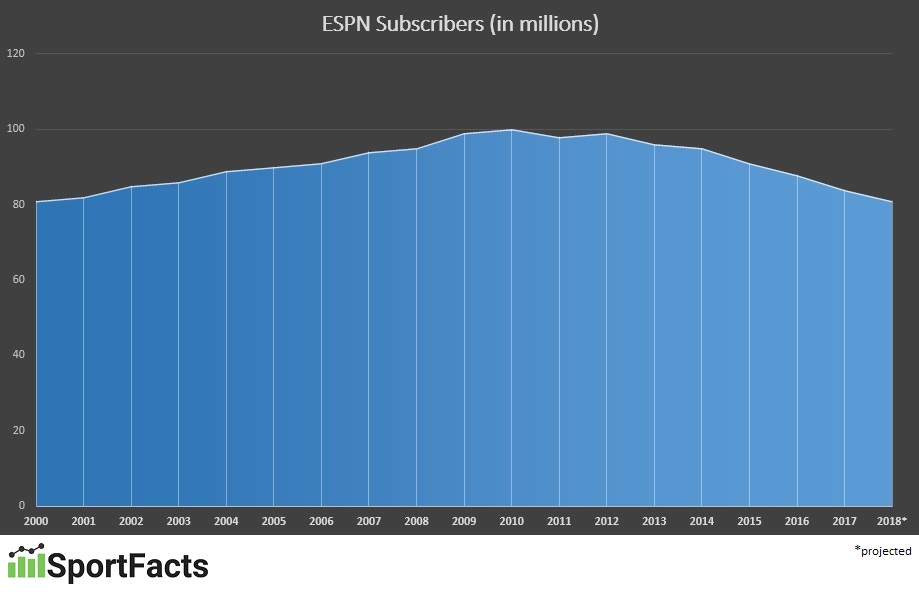 Over the last five years, we have seen a steady decline in subscribers for the world’s largest sports network. What directly attributes to this decline is up for debate, but two prevalent theories seem to be the most likely reasons:

ESPN recently culled dozens of people from their on-screen talent roster, as well of hundreds of behind-the-scenes employees as they look to cut costs amid shifting market trends. As the New York Times reports, there has been an increase in the number of ways in which people consume sports highlights, limiting the need for flagship daily wrap-up shows like ‘SportsCenter,’ once the most popular sports show in the world.

As to what they plan to do to slow the bleed? That seems to be anyone’s guess. While they partner with third party streaming services to offer ESPN online, they have yet to push into a standalone offering, which has proven difficult. Complicated contract deals with major cable corporations have likely stalled much progress on a standalone service.  It also seems likely that people are hoping for a change in the programming offered. The talking heads and “entertainment” focus as opposed to highlights and less mainstream sports coverage seem to be turning younger viewers off, thus effort likely needs to be made to win those eyes back.