With the 2017-18 NFL season only a few weeks away, we wanted to look back at 2016-17 one more time and review some numbers on what was driving fans crazy last year.

We took a survey of 1,084 NFL fans, and mixed responses with social media trends by using tracking tools for sports-related commentary around the web, looking for trending complaints. It was pretty obvious there were two last year that drew most of the internet’s concern, but some others of course emerged as well.

See the results below:

The top five things fans complained about during the 2016-17 NFL season: 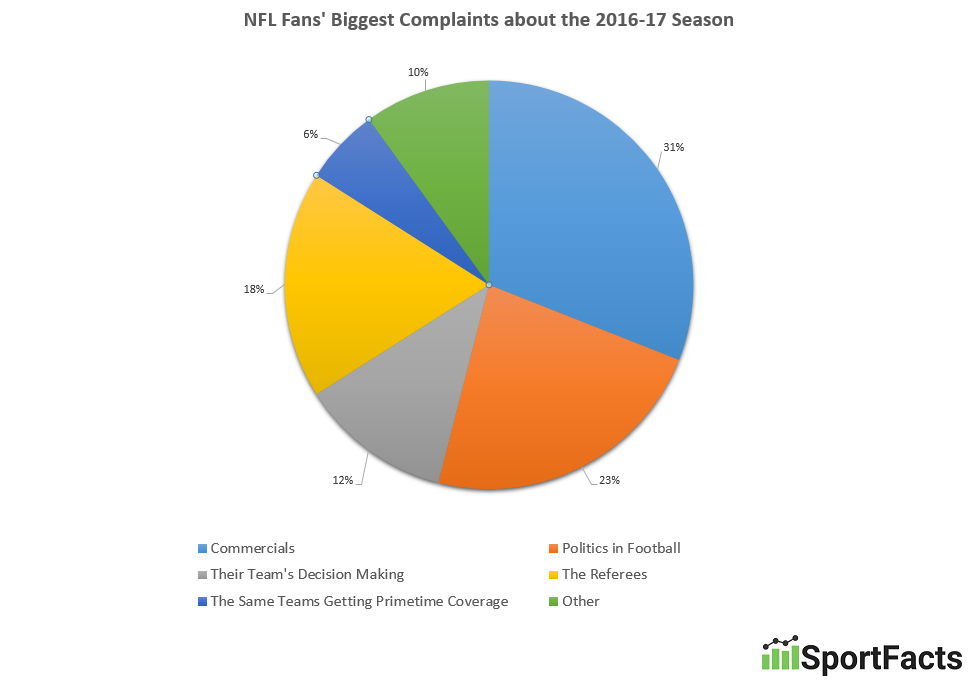 Pretty obviously, “too many commercials” was one of the biggest complaints by NFL fans last season. A lot of studies have shown that there actually weren’t that many more commercials as compared to previous seasons, but if you ask us, the perception towards commercials has changed drastically over the past few years. Streaming services like Netflix offer a way to watch our favorite shows ad-free, so when tuning in for an NFL game, the advertising can feel excessive.

Another thought on this could be that it did feel like it was the same several commercials on repeat, with much less variety. This could create the perception of more commercials as well.

Another hot topic last year was the mixture of players making political statements. Colin Kaepernick being a prime example, kneeling for The National Anthem. Other players and teams joined in with their own variety of stances and gestures, but it certainly became a hot topic for both the talking heads of sports television as well as political television. People were expressing distaste for both the players making any sort of statement, as well as specific anger directed at the messages themselves.

What fun is an NFL season without a few botched calls sending fans into a frenzy. It’s interesting to monitor social media during the games for the trending commentary about what people felt about specific calls. From our previous analysis, the amount of sheer commentary following controversial plays has exponentially increased every year, with more places for fans to share their takes.

Our favorite fan is the one who is aware of their own team’s hopelessness, being led into battle by what they perceive to be a brain-dead coach or front office, but they still show up every Sunday to cheer their team on. Plenty of examples during the draft/mid-week recaps of people complaining about front office moves, and then during and right after each game, a lot of armchair head coaches sharing their opinion online.

Some examples from ‘Other:’

We’ll track this throughout the 2017-18 season as well, and report back to see what changes in the next year.